One does not need to read many psalms before one comes across passages which can leave us uncomfortable, and even shocked. Some of the anger and calls for vengeance, if expressed in our churches, or even in private conversations, would upset and offend. They may even lead us open to charges of hate crime. Here are examples of some of the most shocking pleas:

“The righteous will be glad when they are avenged, when they bathe their feet in the blood of the wicked.” (Psalm 58:10)

“May their eyes be darkened so that they cannot see, and their backs be bent for ever. Pour out your wrath on them; let your fierce anger overtake them.” (Psalm 69:23-24)

“O daughter of Babylon, doomed to destruction, happy is he who repays you for what you have done to us – he who seizes your infants and dashes them against the rocks.” (Psalm 137:8-9)

We cannot remain unheeding of such language. Such language should shock us and appall us, and in the light of Christ’s own teaching to “love your enemies and pray for those who persecute you” (Matthew 5:43), we need to work out how we respond to such language.

Here are some thoughts based on the writings of Walter Brueggemann’s Praying the Psalms and Donald Coggan’s The Psalms.

Firstly, we need to understand the context in which they were written. The psalms were not written in the context of monastic or domestic calm, peace and tranquility. Far from it. They were often written in contexts of extreme violence, where the writer, or their loved ones, were suffering extreme brutality and violence at the hands of their enemies. In such dire circumstances, people often respond with very strong emotions. People going through extreme suffering or pain today may well use language and vent emotions that may seem out of character. Extreme situations often evoke extreme responses. The psalmists are as honest with God about these emotions as they are about their more palatable ones.

Secondly, we need to understand ourselves. The yearning for retaliation and revenge is one that most of us, from time to time, can feel. We may try to hide it, but occasionally, we may long for someone (be it a politician, an unpleasant colleague or neighbour, a rude fellow commuter or road-user) to receive their “come-uppance”, to have a “taste of their own medicine”, to be “taken down a notch or two”. The psalmists, in sometimes shockingly honest language, perhaps reveal some of our own deeper desires.

Furthermore, in articulating such feelings, in bringing them to the surface as the psalmists do, we open up the possibility that such feelings can be addressed, rather than being suppressed only for them to explode in far less safe ways at a later date. Bruggemann suggests that, like with grief, our anger and desire for vengeance is better expressed than being buried to erupt at a later date.

And thirdly, we need to understand the character of God.  It is significant that the words of vengeance and anger are not spoken to the psalmists’ enemies – they are spoken in prayer to God. The raw emotions, even rage, of the psalmists are brought before the only one who can hold them without being hurt – God.

In doing so they articulate a hugely important principle that is upheld throughout Scripture: vengeance belongs to God, and to God alone. It is not for humans to hold on to desires for vengeance. We hand them over entirely to the hands of God, in the knowledge and belief that God is a God of justice. He is a God who cares about injustice, a God who is angered by oppression and wrong-doing and the exploitation of the weak. He is a God who will not simply let wrongs be brushed under the carpet, but will hold wrong-doers to account.

What the psalmists can only have caught glimpses of, but that has been revealed and made possible only in Christ, is that this need for justice, for the punishing of wrong-doing, for the taking seriously of the consequences of sin, God has done in a once-and-for-all way upon the cross. Because of Christ, a new way becomes possible, a way of loving enemies and praying for those who persecute you.

These thoughts may not entirely satisfy, but I hope they will help us as we read the Psalms to be honest before God about our desires for retaliation, and to bring them into his presence, that He may both deal with us and with those who wrong us.

Introduction to the Psalms

Anger and Vengeance in the Psalms – How Do We Respond?

Journeying to Bethlehem and Beyond: Reflections on the Christmas Story 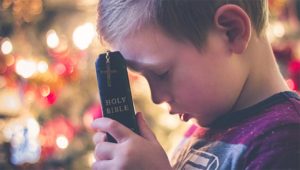