A movement from Bob Chilcott’s Requiem which was published in 2010.

Most of the texts in the requiem are taken from the Missa pro defunctis, a mass offered in the Roman Catholic Church for the repose of the soul of a deceased person. “Thou knowest, Lord” is the only section that is taken from the Book of Common Prayer. The words are one of the seven funeral sentences in the order for the burial of the dead and are said by the priest at the grave side.

The first half of this 5 minute anthem is set in B flat minor. The opening sentence ‘Thou knowest, Lord, the secrets of our hearts’ is set in a quiet and restrained atmosphere with ambiguous harmonies over a simple 4 bar ground bass. The music then builds to more powerful emotion in the plea ‘shut not thy merciful ears to our prayer’, reaching a climax with ‘but spare us Lord most holy, O God most mighty’. In the second half the mood changes, becoming serene as the key changes to D flat major with only a brief return to the original minor key as the prayer continues with the words ‘O holy and merciful Saviour, though most worthy Judge eternal, suffer us not, at our last hour, for any pains of death, to fall from thee’.

The second part of this prayer are repeated twice, ending with a bar and a half of exquisite word painting on the word ‘fall’. Bob Chilcott (b. 1955) has a long association with the Anglican choral tradition; he was a chorister in his parish church and then a choirboy in the Choir of King’s College, Cambridge. He was a choral scholar and then sang for twelve years as a tenor with the King’s Singers. He now works as a composer and runs workshops worldwide to promote choral singing, as he has a strong commitment to young and amateur choirs. Members of St Barbara’s Choir were introduced to the requiem during a choral workshop with Bob Chilcott in Derby.

The Requiem is set for soprano and tenor solo, four part choir and orchestra or small ensemble. It was written for a commission from the Oxford Bach Choir, the Preston Hollow Presbyterian Church in Dallas and Music at Oxford and is dedicated to his niece who died at the age of 23 while he was composing this requiem. The latin words of the Requiem have been set to music by many composers, among them Mozart, Verdi and Fauré; contemporary settings have been written by Karl Jenkins and John Rutter. The Anglican Church has no requiem mass; its service for the burial of the dead has been set to music by notable English composers including Orlando Gibbons, Henry Purcell and Thomas Morley. Members of our Choir with Bob Chilcott, 6th from left and our Organist Normal Owen, 7th from left 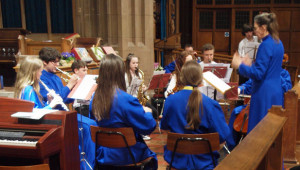 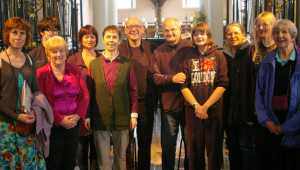